Climbing to the top of Lao Than, my frail body trembled in the slightest breeze, attempting to cling to each tiny shrub managing to establish itself on this bare peak.

The mountain is the tallest peak of Lao Cai Province’s Y Ty Commune, widely known among the Vietnamese trekking community for its beautiful scenery at cloud level.

Lao Than, also known as Hau Pong San, in Phin Ho Village remains off the beaten track though Y Ty Commune is better known as a travel destination in the northwestern region in recent years.

Trekking Lao Than is comparatively easier than many of the surrounding peaks. Though the experience does not have as much of the challenging thrill, it makes up with the beautiful scenery along the route.

At 7 a.m, in March, I woke up at the H’mong ethnic people’s A Ho Homestay at the center of Y Ty. As I looked outside, the entire site was still covered by the morning clouds due to the high altitude. Me and a companion quickly refreshed ourselves with a noodle breakfast and begun our trek.

From the center of Y Ty Commune, we traveled another 5 km via the route heading towards Sa Pa to the Lao Than Mountain foot. After the first two kilometers, we reached a junction signaling the border area, near Y Ty Lodge. Here, we took a left turn.

From the junction, we continued on the red dirt route deep into the mountain. We traveled along rows of blooming white docynia indica trees till we reached Phin Ho school. Parking our motorbike at the house of a nearby ethnic local, we started our Lao Than challenge. 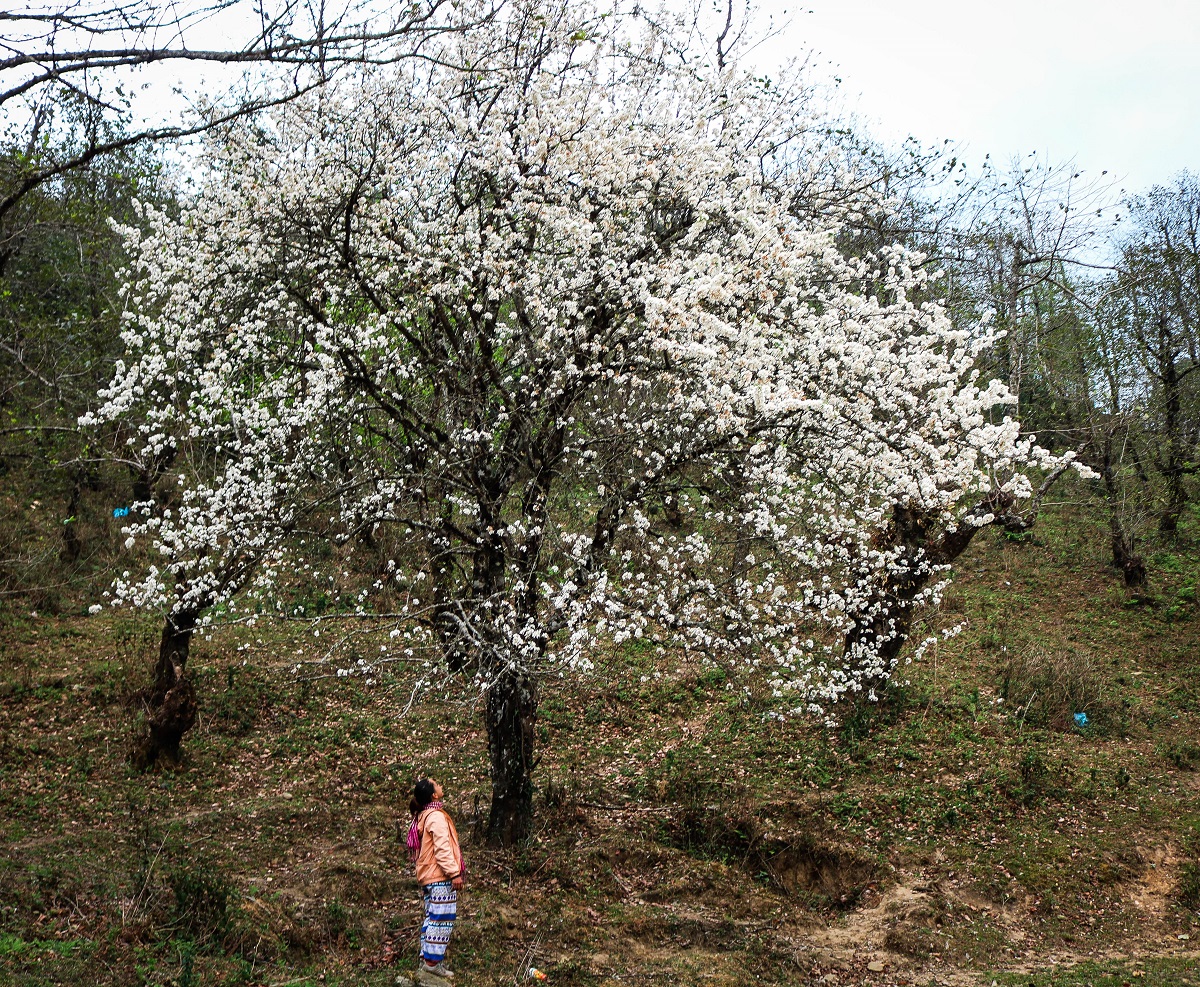 Blooming white docynia indica trees on the way to Lao Than.

Our first steps took us through rows of ancient trees, signaling the intact nature of our route. We first walked along a twisting slope, though not too steep, with various blooming flowers on both sides. I could recognize a few, such as the pink Azalea flowers, or the white and golden cobbler’s pegs.

We then came across a small sign, a helpful gesture by locals to help guide trekking tourists, indicating a 7-km distance from Lao Than peak.

The natural forest slowly opened up before my eyes, with twisting vines and trees darkened with time. We continued through the repetitive sceneries for another hour and a half, before the flat path sections and bare mountains appeared.

The bare mountains had me taken aback. Deforestation had completely overtook the whole area, with logs scattered all over the place and the smell of burnt hay traveling with the mountain breeze. As we continued forwards, winds from the Chinese border kept growing stronger, enfeebling any trekker. 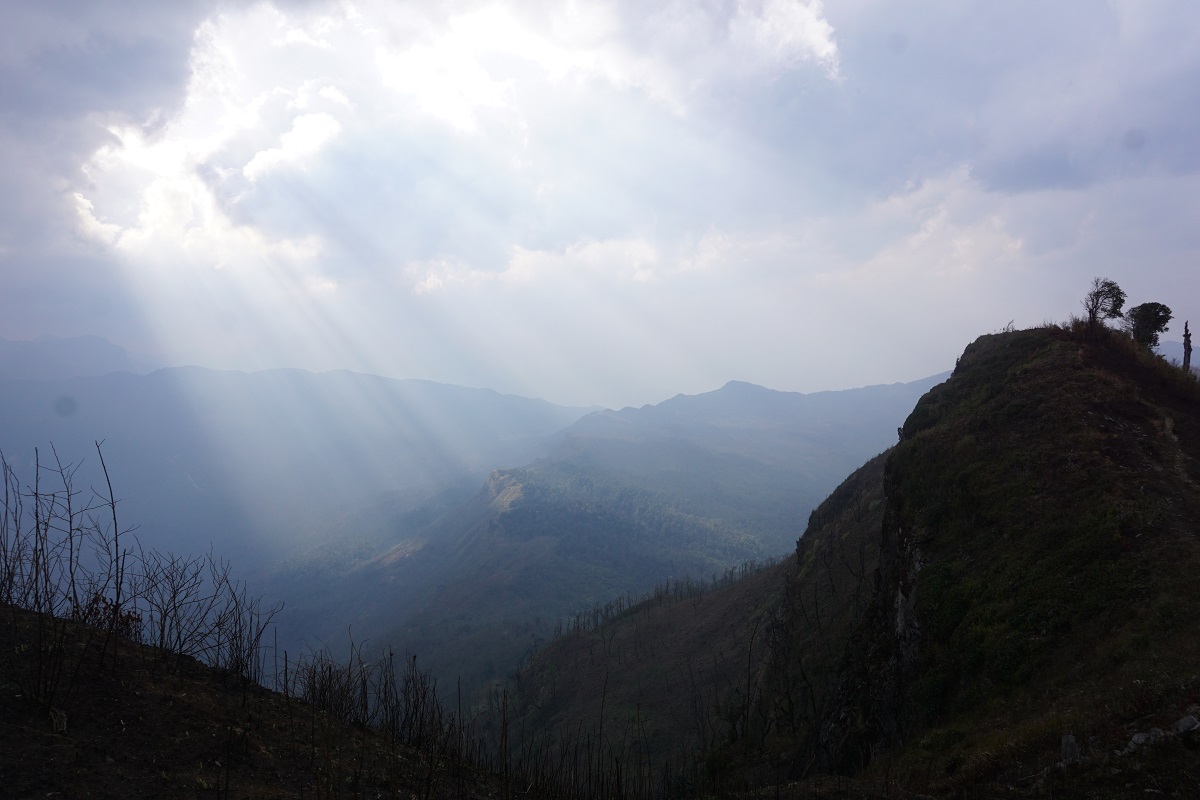 The mountains and forests on the way to Lao Than peak in Lao Cai Province, northern Vietnam.

We took a lunch break near a big mountain, enjoying the meal that our hostel host had kindly prepared, including rice balls, a few boiled eggs and minced meat. Usually, trekkers staying at A Ho Homestay would also hire a porter there, though I opted out since my companion is an avid trekker with tons of prior experience.

After the hasty lunch, we continued on the enervating windy trail, which took a rocky turn. The route was occupied with scattering rocks, which greatly slowed us down. We took a stop at a beautiful rock cave, part to catch our breath, part to enjoy the unbeatable scenery.

Though entering the cave is a challenging task with many impeding rocky ledges, the picturesque scenes inside were well-worth the effort, with waves of clouds flooding in from the early morning gathered at the bottom of the cave. 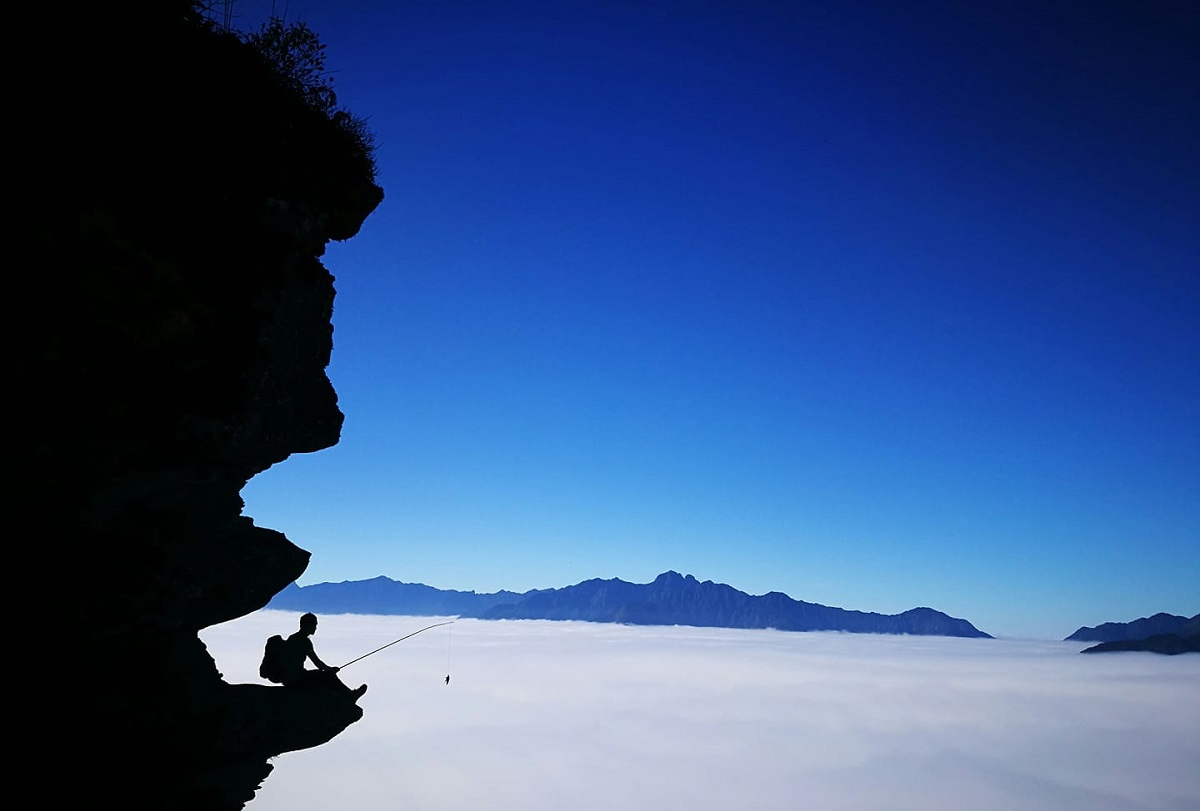 A trekker holding a rod pretends to be fishing in a sea of clouds near a cave en route to Lao Than peak.

Photo by Sung A Tru.

After a long while spent at the cave, we continued our journey upwards. The higher we climbed, the thinner the air got, which greatly weakened my strength. At a 2,600-meter altitude, I finally saw a small cabin, the only established resting point along the entire route where tourists could spend the night.

The outside of the cabin was decorated with many encouraging messages left by locals, hoping to help trekkers find the determination to finish the journey. However, the cabin, established by A Ho Homestay’s host, though capable of hosting up to 70 guests, only opened on the weekend.

As I and my companion had agreed beforehand to finish the trek in one day, we only took a short stop here to take photos. Next to the cabin stood a wooden log that many trekkers had utilized to create beautiful photos to commemorate their trek. I, of course, did not miss my opportunity.

From the cabin, it only took us another 300 meters to the top. The path here was covered with only fern shrubs, with no tall trees whatsoever. Standing here, I cast my eyes to the horizon, seeing the tall mountains on the other side, with light sun rays highlighting the waves of clouds below.

After three hours of hard trekking, I had finally conquered Lao Than peak. 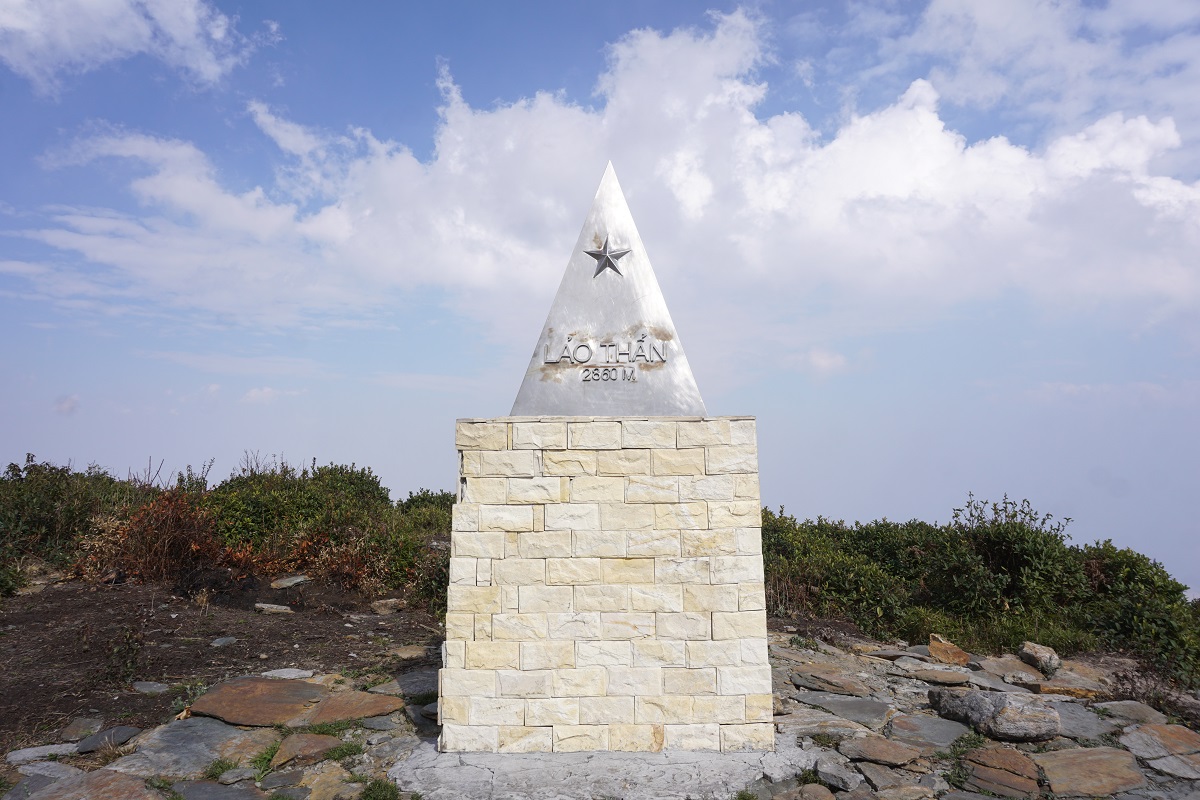 Transportation: From Sa Pa, you could travel to Y Ty Commune by car. This route is quite narrow, and can only accommodate small vehicles. After reaching Y Ty Commune, you could hire a motorbike to reach the foot of Lao Than Mountain. This route is quite steep, with bad terrain, quite hard for inexperienced travelers. After reaching the Lao Than foot, you could park your motorbike at a local’s house to start trekking.

Lodge: Lao Than is not the most challenging trek, so not many tourists visit this destination. Nowadays, only A Ho Homestay (tel: 0125 575 1172) provides overnight lodgings.

Porter: Though some experienced trekkers could conquer the peak by themselves, it is recommended to hire a porter at A Ho Homestay to avoid unfavorable accidents.

Time to travel: It is recommended to avoid trekking in the rainy season, between May and August, a time when the whole route becomes slippery and more dangerous. Aside from that, if you travel from September to October, you could see the blooming terraced rice fields. Flower season occurs from February to April. This is also the time when clouds tend to consolidate into visible waves, creating a feast for the eyes.

Preparation: As the trekking route is quite deserted, please prepare food, water and warm clothing if you decide to trek Lao Than. You would likely meet no one along the route, with no stalls whatsoever. Also, the weather is cold year-long, so keeping warm is essential.